This week, our house has been filled with much conversation around St. Nick. Wyatt asked Miska point blank: is Santa real? Miska’s normal deft response (well, what do you think?) didn’t deflect as it has every time in the past. No, Wyatt said, I want to know for real – is he?

Unfortunately, this conversation proved fateful for a few other children. Miska told Wyatt and Seth to keep this inside information 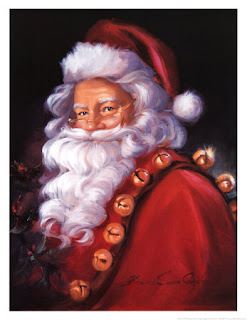 to themselves, since some kids still believed in Santa. Let’s just say our boys are not ones to keep the lid on potent info.

Tonight, I had a long talk with Seth because he had been complaining, repeatedly, that he was only getting two presents for Christmas (and I’m not even sure how he came up with that number, but given the moment, I wasn’t about to respond by telling him that he was probably landing more).

Me: Seth, you need to learn to be thankful for what you have, all the good things you are given, instead of complaining because you don’t get more.

Seth: (beginning to sob) Now, I’m going to be on the naughty list.

Back to the point, this whole Santa thing been interesting. On the one hand, I want Wyatt and Seth to know mom and dad will never lie to them. And – coming from my own hangups, I don’t want to give them any reason to someday wonder: well, if Santa Claus isn’t real, what other outrageous tales (i.e., the outrageous gospel) are bogus?

However, on the other hand, there is something about the wonder and mystery of belief in things like Santa that I very much want them to hold on to. I hope for Seth and Wyatt to have the imagination to have faith in their deep suspicion that there is something (someone?) magnificently good in this world. I want their hearts to continue to know, often against the odds, that the insanity around us (the greed and violence and selfishness) is not the way their world is meant to be. Wyatt and Seth are beginning to understand that a jolly fellow in a red suit won’t be coming down the chimney. But, if I have anything to say about it, their hearts will grow more and more alive to mystery and hope.

words have a way of making friends. drop a few here. Cancel reply